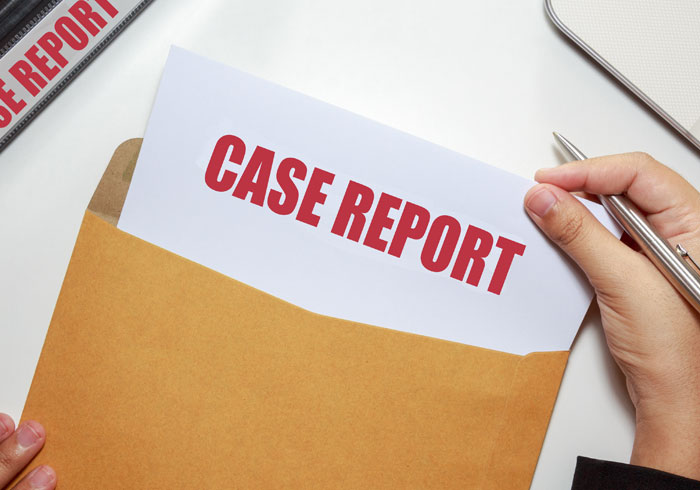 A 62-year-old male presented to the emergency department (ED) with diffuse abdominal pain, worst in the left lower quadrant, and constipation for the past 48 hours. The pain waxed and waned and was worsened by eating. He noted that his symptoms started soon after eating a BBQ pork sandwich. He was discharged from the ED with a diagnosis of constipation and a prescription for laxatives, but within 24 hours his pain worsened and he returned. At this time, he also complained of nausea and inability to tolerate oral intake. He noted that at baseline his stools were always normal in caliber and consistency, and that he had no new medications or dietary changes. On physical examination, his blood pressure was 167/101 mmHg, heart rate 88, and he was afebrile with normal oxygen saturation. He appeared uncomfortable but non-toxic. Abdominal exam revealed a distended and diffusely tender abdomen, with guarding but no rebound tenderness. On auscultation there were high-pitched, tinkling bowel sounds. Rectal exam revealed scant brown stool. Laboratory studies revealed a slightly elevated white blood cell count at 10.5 K/mcL, an otherwise normal complete blood count, and normal basic metabolic and liver enzyme panels. Computed tomography (CT) of the abdomen and pelvis with oral and intravenous contrast demonstrated focal colonic narrowing at the junction of the descending and sigmoid colon, with associated thickening and pericolonic stranding. A curvilinear 4 cm density presumed to be a foreign body, possibly a pork bone, was located at the proximal aspect of this narrowed segment (Arrow, Image 1). Surgery was performed. At laparotomy the proximal colon was severely dilated with no evidence of necrosis or perforation. No foreign body was noted; however, a sigmoid mass was palpated and a resection was performed. Pathology revealed a calcified invasive well-differentiated T3N1a colonic adenocarcinoma with tumor deposits in the mesenteric fat.

Many case reports have been written about foreign bodies masquerading as colonic tumors, but here we present a case of a colonic tumor masquerading as a foreign body. This patient’s history of the acute onset of symptoms, so close in proximity to a meal which potentially contained a bone, and the CT scan which revealed a curvilinear density, which very much appeared to be a bone of some type, made foreign body ingestion and subsequent obstruction high on the differential. Ultimately, it was determined that the curvilinear density seen on CT scan represented calcification within the tumor. Intra-abdominal calcifications seen on imaging are usually benign.1,2 Calcifications within tumors of the gastrointestinal tract are infrequent,2,3 and when seen are usually in association with a mucoid or mesenchymal tumor, but not in adenocarcinomas, as in this case.2,4 Calcifications associated with colonic adenocarcinomas are more frequently observed in the metastases of the colonic primary, especially in the liver, which occurs in 12-27% of cases.4 More frequently, calcifications are seen in more slow growing tumors. The pathophysiology of this process is unknown but is thought to be attributed, in part, to devitalized tissue or mucin within the tumor creating a more alkaline environment which allows for precipitation of phosphate and carbonate salts.1,4 A few case reports exist in the literature of calcifications within colonic tumors, with the first case being reported in 1954.2 These calcifications were described as small and punctate, or arranged in stippled fashion, and overwhelmingly, the histopathology revealed mucoid carcinoma, not adenocarcinoma.3 Our patient’s calcification more closely resembled a curvilinear foreign body. In summary, we present an unusual case of acute colonic obstruction with imaging suggestive of a foreign body, perhaps a bone, which ultimately was diagnosed as calcified colonic adenocarcinoma.

Any cookies that may not be particularly necessary for the website to function and is used specifically to collect user personal data via analytics, ads, other embedded contents are termed as non-necessary cookies. It is mandatory to procure user consent prior to running these cookies on your website.